During the spring and fall, parts of our community are taken over by crows. They tend to gather in flocks of hundreds of thousands along the Thames river in Chatham, right by residential areas. Of course this has caused problems such as the birds getting into garbage and leaving nasty surprises on cars. Some people want to get rid of them by shooting them, others send in birds of prey to scare them away.The intelligent crows seem to figure out our tactics and steer clear.

I decided on the name Frenemies for this piece. The crows must think of us as friends sometimes, since we provide them with tasty food such as garbage, and vast fields of corn. Yet we are their enemies and attempt to eradicate them.
Many people think of the crows as our enemies when they dirty our cars, but they are our friends when they eat rodent pests, damage-causing beetles and road kill. They are also a wonderful sight flying en mass at sunrise to go about their day.
This painting is also about "frenemies" in the crow community. These two groups of crows have paused in their effort to take over the world, to argue about something, maybe a tasty morsel or a tantalizing shiny object to treasure!

Completed today...may have some touch-ups to do, but done for now!
Posted by Unknown at 3:54 PM 9 comments:

I did these three little cards a few weeks ago while painting with some friends. These tiny little cards are perfect to paint while chatting! 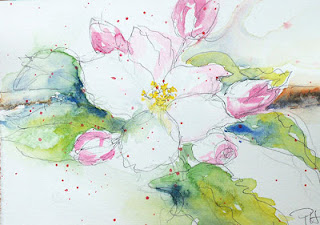 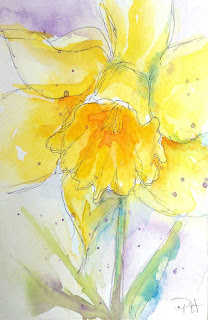 Lily of the Valley "Return of Happiness" 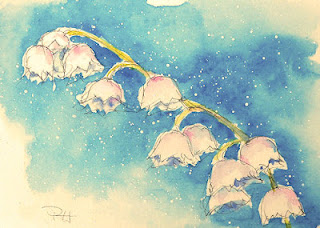 All of my ACEO's are available in my ETSY Store here.