From My Sketchbook ~ Jackie's House

Last winter our next door neighbour moved into a rest home and sold the house that she and her husband built many years ago. I don't believe that any renovations were ever done to their house over the years, and it still has the same grey "insulbrick" siding and funky turquoise trim. Both we and our neighbours have large "double lots". When we first moved in, 19 years ago, Frank and Jackie's entire side lot adjacent to ours was a huge garden. Frank worked in it tirelessly all summer, even though he was elderly. They were generous with their bounty and would share whatever they had.
Over the years, the garden got smaller and smaller, until Frank could no longer look after it. Once he passed away, it was grassed over, but some of the flowers and shrubs still remain.
The new owners (who bought the house months ago and not moved in) have sent out a notice that they wish to sever the second lot next to us. We are worried that someone will buy that lot and build one of those huge new houses, squeezing as much house as possible onto that land.
I was thinking how much I've grown to like the view of her house from my kitchen window with it's overgrown forsythia bush on the side which houses a large family of sparrows, and our favourite lilac bush that provides us with sweet scents wafting into our windows.
I went out and tried to capture that view this morning, because I'm afraid it won't be there for much longer.
Posted by Unknown at 11:26 AM 9 comments: 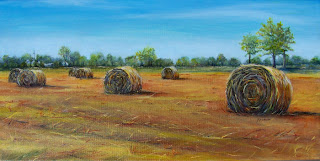 Here is the latest: Added more trees, lightened the horizon sky, and put more "sunshine" on the field. I still see some spots that need more attention though.
Posted by Unknown at 12:20 PM 5 comments:

Some of you may remember my attempt last year to paint a landscape in acylics. It was based on a photo of some haybales in the field behind our house. I was never really happy with how it turned out, and it sat in my studio all winter mocking me.

I'm taking a vacation from work this week, a much needed break from stress. I decided my first venture would be to tackle a revision of this painting.
I decided the treeline was pretty boring so I fixed that up by bringing the sky down some into the trees and breaking them up a bit. I also added more farm buildings and a couple of larger trees. A suggestion I had received was to add more texture to the foreground field, so I attempted that, but I'm not sure how successful I was!
Here is the before: 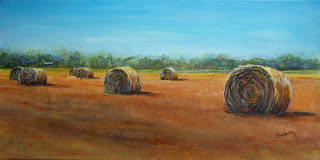 I'd really appreciate your feedback on this one...is there too much or not enough texture in the field. Does it need to look more realistic?
Posted by Unknown at 1:18 PM 2 comments: 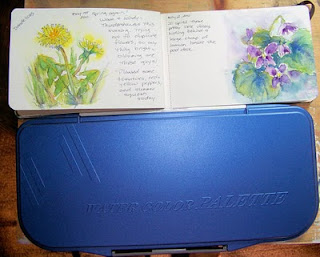 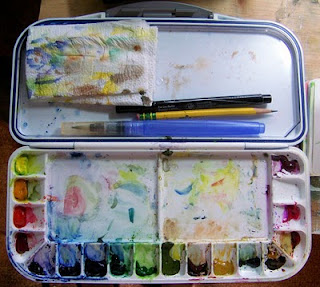 In my previous post, someone asked what I use for sketching. I've settled on this Homee watercolor pallette. It's about 10.5 X 5 inches when folded up and inside I keep my Holbein watercolor brush and right now I'm using a 01 Prismacolor pen. I also have a pencil and a piece of paper towel.

It's nice and flat and will fit into a purse or backpack easily. My pen and brush etc. fit right inside when it's closed. I use a small Moleskin sketchbook for my garden journal and a larger one for landscape sketches.
Posted by Unknown at 7:51 AM 3 comments:

Digging out the Sketchbook!

I decided to get out my garden journal sketchbook, but there wasn't much yet to sketch that I hadn't done last year.
The only flowers that were blooming in abundance were these dandelions!
It felt good to get outside with the pen and paints!
Posted by Unknown at 11:39 AM 9 comments: